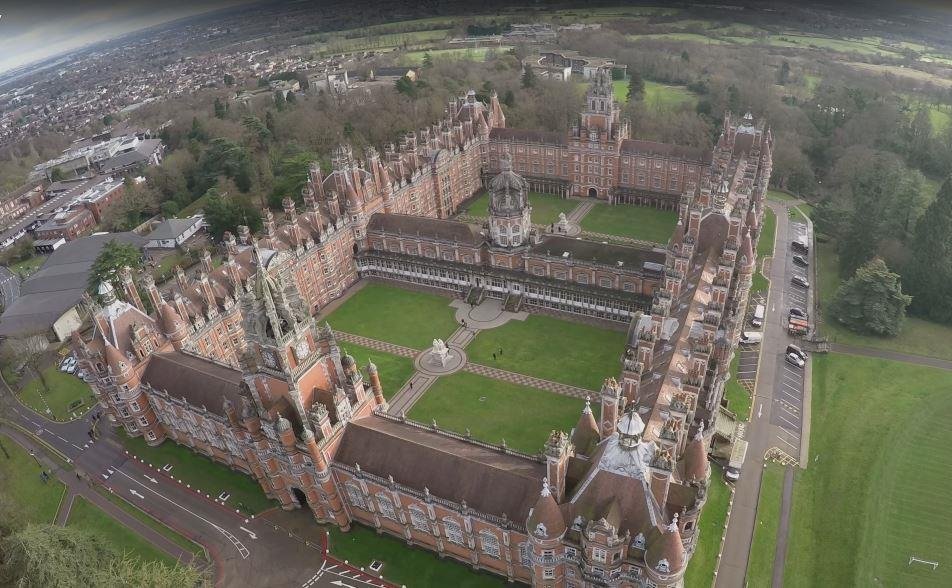 The Founders building is the heart of the College. As soon as you enter the grounds through the main gates it strikes you in all its glory. Many alumni were struck by it when they arrived for their interview or when they first started their course and spent many hours in it during their student days. There were reported hauntings on some of the upper floors and the clock tower always let you know that time was passing.

As well as providing accommodation and dining for a large number of female students it also provided:-

In the 70s the accommodation rooms all had working gas fires which were ideal for toasting crumpets or just for creating a cosier atmosphere. These days the fire regulations mean that there are no gas fires any more and any alarm guarantees the arrival of several fire engines within minutes.

The construction of the building began in 1874, and was completed in 1881. The building and the college were a £600,000 "gift to the nation" by the entrepreneur and philanthropist Thomas Holloway. It was designed by the architect William Henry Crossland, and inspired by the Château de Chambord in the Loire Valley, France.

The building was officially opened in 1886 by Queen Victoria, who allowed the use of "Royal" in the college's name by Royal mandate. A statue of Queen Victoria sits in the centre of the north quadrangle. The centre of the south quadrangle contains a statue of Thomas Holloway and his wife Jane. The marble statues were sculpted by Prince Victor of Hohenlohe-Langenburg (Count Gleichen).[1]

The Founder's Building houses the Picture Gallery, containing a collection of over 70 pieces of Victorian era art given to the college at the time of its founding by Thomas Holloway. The college's Main Lecture Theatre, non-denominational chapel, and one of three libraries on the RHUL campus are also housed within the building.

Today, the offices of the Department of Politics and International Relations, the Department of Classics and some offices of the School of Management are housed in the building, while other academic departments of the college are located in more modern buildings on the college's campus. Many of the college's main administrative offices remain within the Founder's Building. It is also a Hall of Residence for the campus, with rooms for over 470 students. A bar within the building is named "Crosslands" in honour of its architect.

It is the one aspect of the College that has remained most similar from outside - and inside, at first glance, but subtle changes in many areas have been made to make it more comfortable, more secure and more capable to deliver the facilities required by the student population today.